Like any good recipe, you have to begin with the right ingredients. Hacker-Pschorr beer is brewed according to the strictest and oldest regulations of brewing as set out in the Bavarian Purity Law, which was issued in Bavaria in 1516 by Duke Wilhelm.

Hacker-Pschorr beer is made from only 4 ingredients: water, malt, hops, and yeast.

Water is the most important ingredient in beer – its chemical composition is essential for a beer’s taste and character. It must be clear, free from any aromatic substances, soft, colourless and odourless. Microbiologically, it has to fulfill the high standards of drinking water.

Malt is made from grains like barley or wheat. During the malting process, the grains are steeped in water and brought to germination. After growing for one week, the grains are dried, kilned or roasted. Now they can be used for brewing beer. After roasting, these grains develop a typical malt flavour that gives beer, especially dark beer, its original taste.

Hop plants grow in countries like Germany, Czech Republic, Denmark, China, U.S.A. and Australia. Flowers from these plants are used in a very low amount to season beer thus creating the typical beer- and hops-aroma. Hops are an herb used in brewing for their antibacterial effect against many germs and are also useful for calming the nerves.

Yeast is a form of bacteria able to ferment sugar into alcohol and carbon dioxide. It regenerates itself up to 6 or 7 times during the fermentation phase and can be harvested for later use. 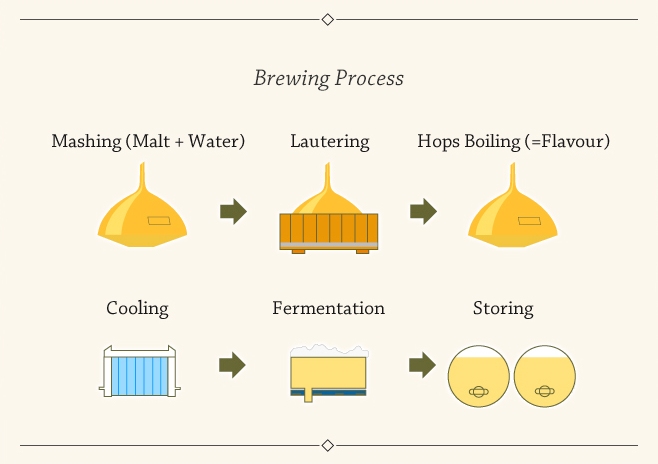 Whole grain malt is crushed and grounded into grist and flour. Malt grist is mashed with warm water by heavy stirring. The mash is held at several temperature levels and heated up to 78 °C.

Mash is pumped into a lauter tun, strained and filtered. Lautering separates the liquid from the insoluble part, the wort from the spent grains. Spent grains are removed and can be used as food for cattle, pigs or poultry.

The wort is boiled heavily for approx. 1 1/2 hours, during which time the hops are added.

Hot wort is cooled down to fermentation temperature, otherwise the yeast would be killed in the hot liquid.

The cooled, clarified wort is then subjected to top or bottom fermentation in open or closed containers with the addition of yeast. The fermentation starts immediately and takes up to 7 days, while the young beer is kept cool at 7 to 9 °C. The sugar is fermented to alcohol and carbon dioxide.

After the main fermentation, the young or "green" beer is pumped into storage tanks, where the final ageing and post-fermentation takes place. The clearing and development of the final taste, colour, freshness and aroma occurs. The yeast settles down. The beer is kept under pressure and at the near freezing point. After 3 weeks maturation, the beer is ready for consumption and can be served without any further treatment. Fresh beer still contains yeast, resulting in its cloudy appearance.

Hacker-Pschorr is committed to the responsible consumption of alcohol. Since the following pages provide information on alcoholic beverages, we ask you to confirm your age.

Please bear with us!

You must be of legal drinking age to visit our website. When you are, just drop by again!
Drink responsibly